4.17.2011
I've had the video now for about a week, and it was an interesting experience watching the first night.  It felt so frantic, wobbly, and unstructured from the inside of it, but it looks sharp- with things really cinching together in the right spots... and the improvisation at the end looks good!

Last night I tended to the end of the Berlin section, following Bill's suggestion to intensify the energy with which I do the "tension" movements after I return to the wall and speak.  Text: "I return.... HERE, this- TRAGIC, PUBLIC, MEMORY..."
Then I wrap around SR and stop.  Hit "CONNECT!" with a spreading pose; "STRETCH!" with a contracting, crossing pose; (maybe another movement here?); "BREAK" with a circling R arm gesture; and "DIVIDE" while cinching it all together.  Then head falls forward to set off next phrase.

I also played with different spatial locations for the start of each section, pulling Brussels and Vienna off center.  Thinking about it now, I do really want the opera and the DSR corner to be a big change, so I'll need to... not sure.

Thinking also about how I might want to add in another moment of speaking, most likely in the Vienna section.  I pulled a Vienna map out of my bag accidentally and scoured it for possible text.  This led me to jump on the computer and search first for Vienna tour guides.  I then searched for "confused in Vienna"which yielded a tripadvisor.in thread about the confusing train changes related to the closing of the Sudbahnhof (http://www.tripadvisor.in/ShowTopic-g190454-i147-k3518724-CONFUSED_Trains_from_Vienna_to_Brno-Vienna.html).


That said, I was actually in the studio three times this week to rework some of my material upon further thinking/clarification and incorporating some of the feedback I was able to get from my meetings with Peter, Robin, and with Jennifer Robertson. The main ideas I took from these meetings include further defining the environments I am creating- which will hopefully help me make decisions about the multiple layers that make up each area (movement, coordinates, music, Kyle's tracking program, Collin's developing sketch photos).  I'm not sure if the Live Feed footage is going to make it or get the ax.  It feels to me right now like just one more idea that might not be needed.  The feedback also commented on the type of movement in each section- perhaps more variation needed- and gave me some ideas of how to shape the final section - getting increasingly more specific as the lights fade; going into set, detailed sequences.


I reworked Berlin in the following ways:

I feel pretty good about Berlin. The shape of the travel pattern is pretty square-like. I think there's some tension and real bursts of energy in there.  I'm not sure if the movement is too "careful", but I think going over it time and time again will get it in my body.  New parts: after the zig-zag walks I lunge left, jump to a crossed pencil, lower, interesting handstand/cartwheel my feet to ground, shoulders turn, step, jump cut, to knee, and up.  I just then added the subway arrows bit (hips down + turn, R arm over to the left, head back right, arms cross).  Travel backwards DS to lunge, spin, lunge on wall.

I finished the phrase that interrupts my talking.

Text bits still need to be written/found.  Tension, the wall- look through my journal!!
"even fabric has tension. the lines stretch... pull... divide... separate..."

Then the sweep L leg behind, arms drape overhead, lunge sweep R arm back, jungle gym arms around, R arm swipe- up and over pole, pull back across.


I met with Collin last night to discuss projections.  My ideas is to have her sketch on top of my photos from these places, making them appear drawn.  Her process of animating her drawing might add such an interesting and appropriate metaphor to these images- where we can see the drawings progress and leave smudges behind- traces of what was there.

Here are the images I've selected from each place.  A further refinement/paring back might be necessary.
I've also been collecting music from the places- like Marta's playlist from Impulstanz. 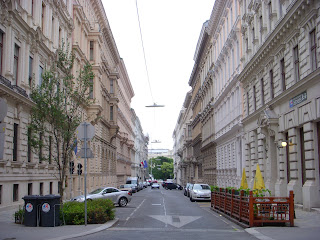 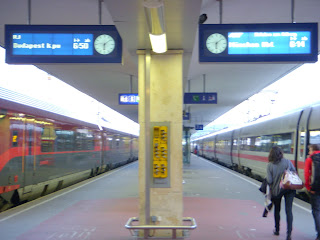 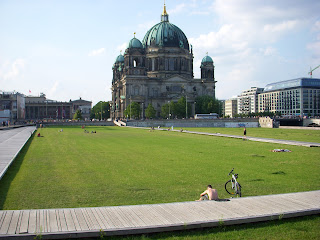 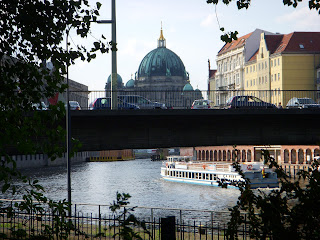 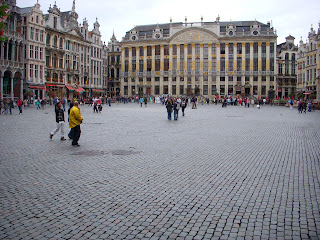 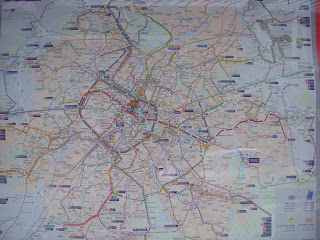 
I haven't dedicated much thought to this section yet.  My impression was pretty favorable over-all, despite the challenging street layout, the inconvenient metro system (for my purposes), and the imposing, imperial buildings.  My apartment was great, I wandered a lot, mapped and built phrases a fair amount, and danced everyday with Impulstanz and all... And that great concentrated juice syrup that they add to drinking water. 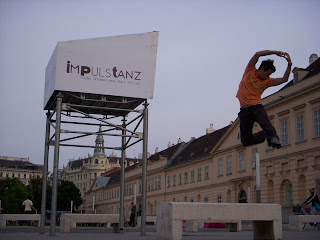 I am thinking I will pause, the coordinates will be read while the environment is slowly built (projections, lighting, and sound all arrive by the end of the reading).  Projections will be a mix of live captured video (from overhead camera and select camera spots on stage), live feeds of the places, photographs made to look like drawn pictures, and my body video with added coordinates.  The schedule of when each of them are projected and how they move between the screens will have to be decided by March 7 - the day we come back from Spring break.

I discovered this video of a street musician in Brussels- playing as people (tourists) walk by.

As a result, I'm motivated to go a little deeper into some of the ideas and topics that have been coming up.  Noticing that tension was one sense I had- whether projected or actually present in the environment- while in Berlin... near the wall... I searched for 'Berlin' and 'tension' in trusty Google.  I came up with this: The ICI Berlin project that does a lot of defining of tension: http://www.ici-berlin.org/core-project-spannung-tension/
________________________________________________
1.27.2011
Looked at footage taken in the video studio before Christmas break.  The idea was to turn the cameras into explorers and for my body to be the terrain.  I had three cameras on me: Jacques on the jib, Jeff on the close follow, and a steady camera pointed at my feet.  I selected clips I thought were visually interesting, but the sequence is not edited.

I've thought about sequencing the clips so it moves between the 3 cameras and I go from more movement to stationary to movement, etc.  I might also consider jumping to images of actual physical landscapes- rolling hills, etc. though I think searching for those might be too time consuming at this stage.

A week ago today I had a 2+ hour Motion Capture session in the digital video studio.  I am not sure what, if anything, I will do with the footage, but I couldn't pass up the opportunity.  Here's a sample clip of what it is like (which I'll replace with some of my own footage once I receive it):

I am drawing upon material I created while doing site-specific movement compositions in urban environments in Vienna, Berlin, Paris, and Brussels in July and August, 2010. Here are some of those clips: